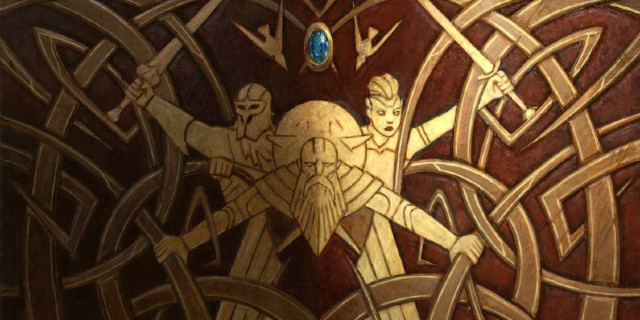 Kaldheim is finally here and with the new cards we have a whole new format Standard to explore. Some of the Kaldheim cards are very interesting designs that will take some time to evaluate properly, but we are already seeing the impact of the new tools at our disposal.

So……what are my predictions on Standard? 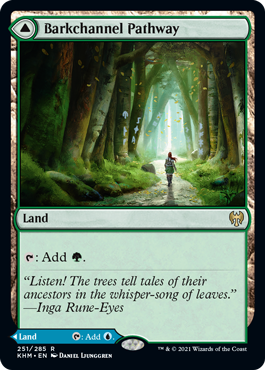 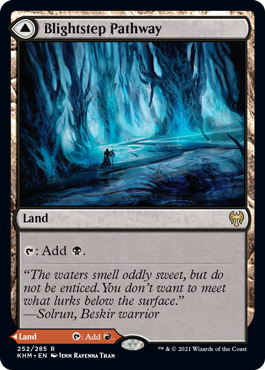 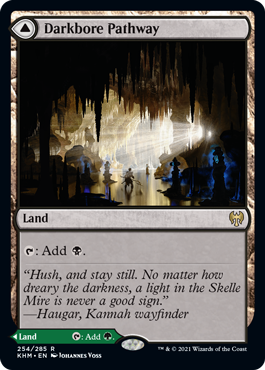 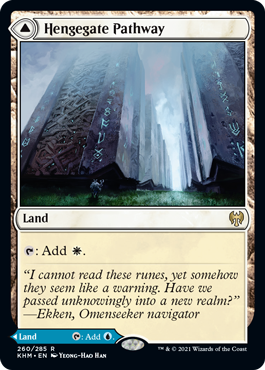 It’s no secret that dual lands often determine which decks see more play in any given Standard, and this one won’t be an exception. All the two-color combinations have now access to Pathways and more importantly every single three color combination will have access to twelve pathways plus 《Fabled Passage》, which means most color requirements are going to be easier to manage. Some of the combinations will even have access to Triomes as well, and therefore I expect those to be able to cast even double colored cards relatively often. 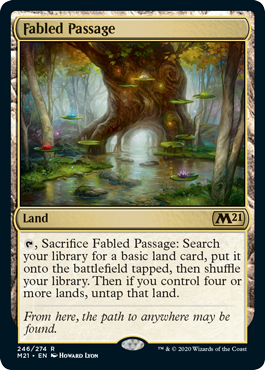 This means we will see more three color decks, since even decks that are already well-rounded like Gruul or even Dimir Rogues might be interested in adding another color since they already want to play 《Fabled Passage》. I also think slow decks like Dimir Control won’t be just playing two colors anymore and I expect Yorion decks to try and possibly stay at four colors.

2．《Showdown of the Skalds》 Is the Real Deal 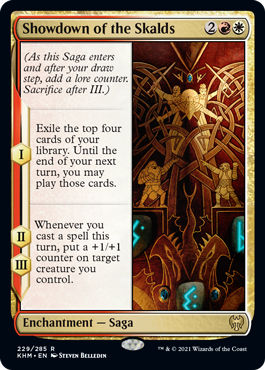 On the first look, I thought 《Showdown of the Skalds》 would be playable but nothing special, like a worse 《Escape to the Wilds》 that might be played in some sideboards. Turns out 《Showdown of the Skalds》 could simply be a better 《Escape to the Wilds》, a card that is already banned in Standard, even though I suspect that wouldn’t be the case if it wasn’t for cards like 《Omnath, Locus of Creation》 or 《Uro, Titan of Nature’s Wrath》.

《Showdown of the Skalds》 offers raw card advantage at an excellent ratio as long as your curve is low enough to support its effect. However, it doesn’t stop there, as chapter 2 and 3 also offer a way to make cheap spells relevant even later in the game.

《Showdown of the Skalds》 will often read as: draw four cards, put four counters distributed between creatures you control. That is obviously a best-case scenario, but the value we would get in that situation is off the charts. Even if we get to play only three of the cards we flip with 《Showdown of the Skalds》, we are still getting a three for one while getting some card selection (since we choose which ones we play) while still generating a relevant amount of +1/+1 counters between our creatures. This card will see a lot of play I think it is certainly one of the best cards of Kaldheim if not the very best. 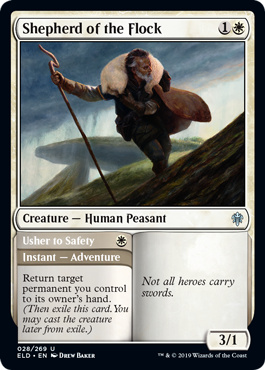 The way sagas work lets us have priority after last chapter trigger goes to the stack but still before the saga itself is sacrificed. Therefore, we can respond to the trigger casting 《Shepherd of the Flock》 targeting our saga. This way, we still get the Chapter 3 bonus for our turn but the saga won’t go to our graveyard since it is already in our hand, ready to be cast again for more card advantage. Keep in mind that we will not get a +1+1 counter for casting 《Shepherd of the Flock》, because we have to cast it before the trigger itself resolves, since as it resolves we would sacrifice 《Showdown of the Skalds》. 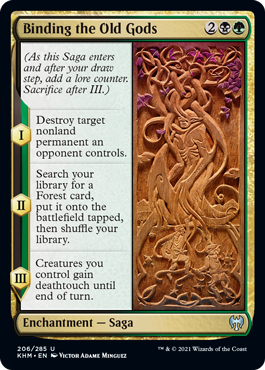 This is another card I was vastly underrating, but the more I think about it, the better it compares with 《Elspeth Conquers Death》. 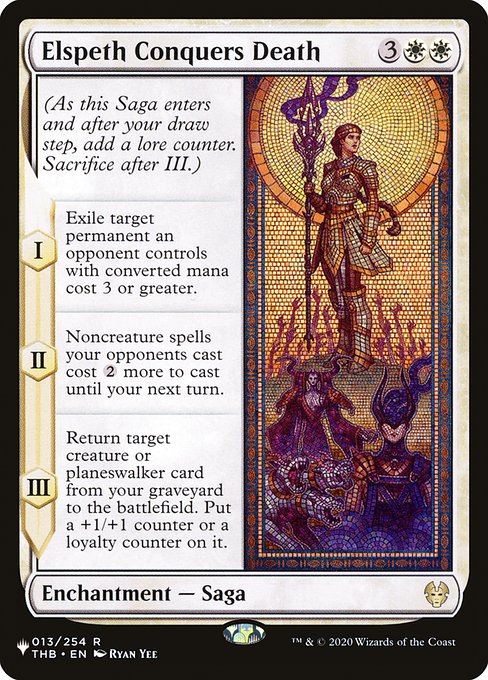 They both get two cards out of one saga with enough time, and they both get to deal with one permanent instantly. However, lets talk about the differences. The first one, and likely the biggest one, is that 《Binding the Old Gods》 will deal with any nonland permanents. The subtle thing here in the current Standard is that 《Binding the Old Gods》 will never be almost a dead card while 《Elspeth Conquers Death》 is actually very weak in certain matchups, like Dimir Rogues, where drawing multiple copies or even the first one of 《Elspeth Conquers Death》 is going to make us lose games.

Both sagas get an extra card on one of the Chapters, and even though the 《Elspeth Conquers Death》 card will also give us tempo advantage since it comes back directly to the battlefield, it will also often go to waste, since Yorion decks don’t play that many targets to get back from the graveyard.

《Elspeth Conquers Death》 Chapter 2 being disruptive certainly makes the card better, and it compares with 《Binding the Old Gods》’s Chapter 3 which is…

Mostly a blank. Seriously, it could have literally no text, but the interesting part here is that the saga DOES have a Chapter 3, even if it does nothing, which makes it way better. The reason is that we can get our two cards out of our saga and afterwards, still have a turn to blink it with 《Yorion, Sky Nomad》, which is something we can’t do with 《Elspeth Conquers Death》.

The biggest and most obvious downside of 《Binding the Old Gods》 is that it is a multicolor card, and none of its colors are the colors of 《Yorion, Sky Nomad》 or 《Showdown of the Skalds》, which is a card that also plays very well with Yorion.

4. Some of the Gods Will See Standard Play, but Likely Less Than Other Gods We’ve Have in Standard Before 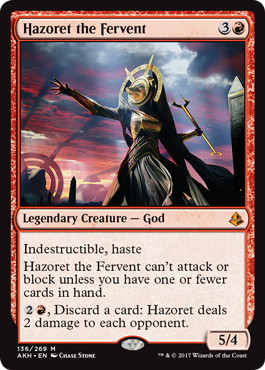 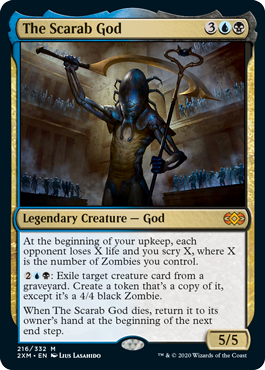 There are some strong God cards around, but I think none of them are as strong as cards like 《Hazoret the Fervent》 or 《The Scarab God》 who simply defined color combinations or even the whole metagame. 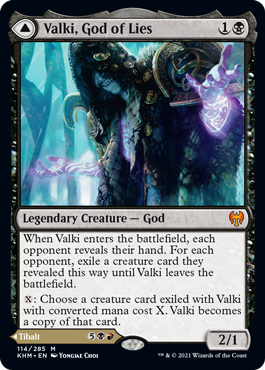 《Valki, God of Lies》 is likely the best one. It was clearly designed to be an anti-《Uro, Titan of Nature’s Wrath》 card but that also makes it extremely strong against 《Kroxa, Titan of Death’s Hunger》 as well. It also plays relatively well against 《Edgewall Innkeeper》 decks and is overall a very good card. 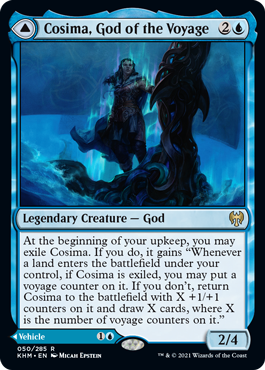 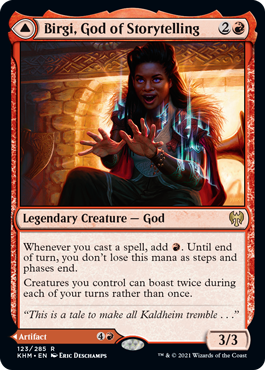 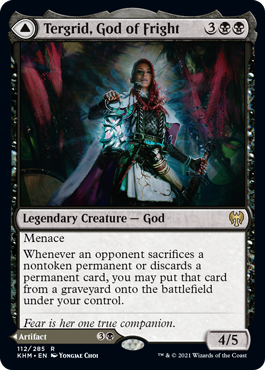 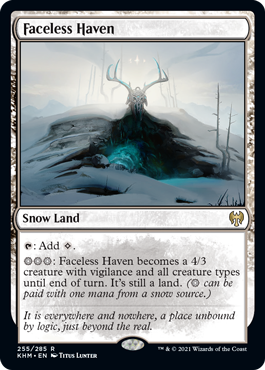 《Faceless Haven》 ratio as a creature-land is simply excellent. Four power for three mana makes it a relevant threat and the cost is quite low as long as it is played in a deck like Mono Red Aggro. Until now, there wasn’t that much of a reason to stay on only one color except having more untapped lands, which wasn’t simply enough to justify giving up the extra power another color adds to a deck. However, 《Faceless Haven》 provides a reason for that, since it plays very well in decks that are full of cheap creatures.

Aggresive decks struggle against removal spells, particularly massive ones like 《Extinction Event》, and I expect 《Faceless Haven》 to be an excellent pickup for aggressive decks. I think 《Faceless Haven》 is better than 《Castle Ardenvale》 on an aggressive deck and might even be better than 《Castle Embereth》 Itself, even though a Mono Red Deck will likely be able to play a mix. 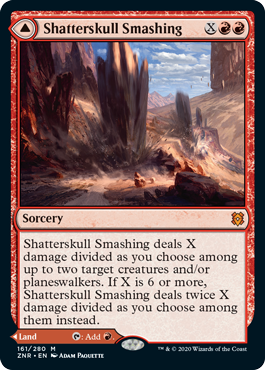 That’s it for today. Thanks for ready and I hope you enjoy exploring Kaldheim!

《Showdown of the Skalds》

The State of Standard and My Insights About Sultai Ultimatum