What to Expect In Modern With Strixhaven: School of Mages 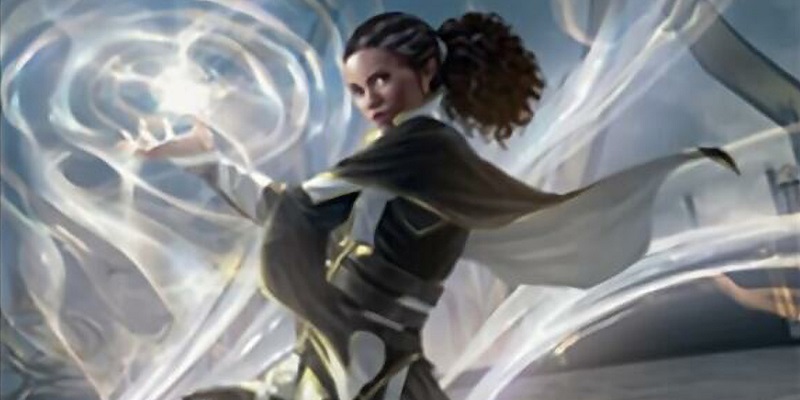 Strixhaven: School of Mages released online a few days ago. While the set feels fairly low-powered, especially in comparison to the insanity of the past two years of releases, there are still some interesting cards that might show up in various places in Modern.

In this article, I will go over the cards I find the most appealing. 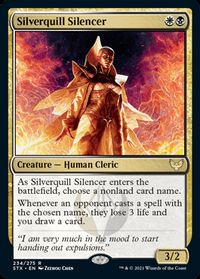 A new potentially playable option for the Humans deck. Humans metagame share nowadays is getting tinier and tinier. As it was traditionally a deck excelling at clocking at disrupting combo decks simultaneously, with all combo getting banned there is little left for Humans to prey at, while matchups against 《Lava Dart》, 《Heliod, Sun-Crowned》, and big mana decks all leave much to be desired.

《Silverquill Silencer》‘s effect is a significantly worse version of 《Meddling Mage》, in exchange for which you receive an additional point of power. At least, with no combo around, 《Silverquill Silencer》‘s soft hate effect is much more acceptable, as it’s okay to get minor value once your opponent casts the named removal spell; less so if it’s upon your opponent casting a game-winning one.

While in the end, I think this print is unlikely to revitalize the nearly-dead archetype, it is very attractive that it’s a two-mana card that Humans could incorporate. Many sets introduce promising three-drop options for that tribe, but a decent two-mana creature is much more of a rarity and should be therefore paid more attention to. 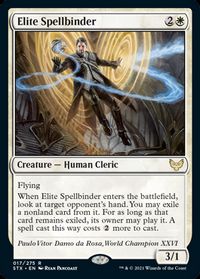 Speaking of playable three-mana humans, 《Elite Spellbinder》 might be another one. One-toughness, as always, is a big deterrent, but I could see 《Elite Spellbinder》 play a role in 《Aether Vial》 decks. While as I mentioned in Humans we run into the issue of having too many three-drops, and disruption is not a new angle of attack, for specifically Mono White Death and Taxes it’s something those decks used not to have access to.

Taxing your opponent’s spells further plays well with the theme of 《Thalia, Guardian of Thraben》 and 《Leonin Arbiter》. It’s also worth noting that 《Elite Spellbinder》‘s effect is not linked to the creature surviving, therefore it combines well with 《Flickerwisp》 or other blink effects like 《Ephemerate》. 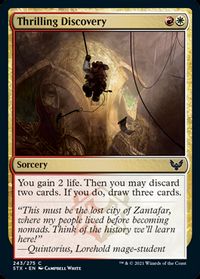 《Thrilling Discovery》 is, indeed, quite thrilling of a printing. Essentially just more copies of 《Cathartic Reunion》, Modern Dredge is assuredly interesting in splashing for that effect. In fact, Dredge mastermind Sodek already 5-0’d a Magic Online league with a build of Dredge splashing the card. 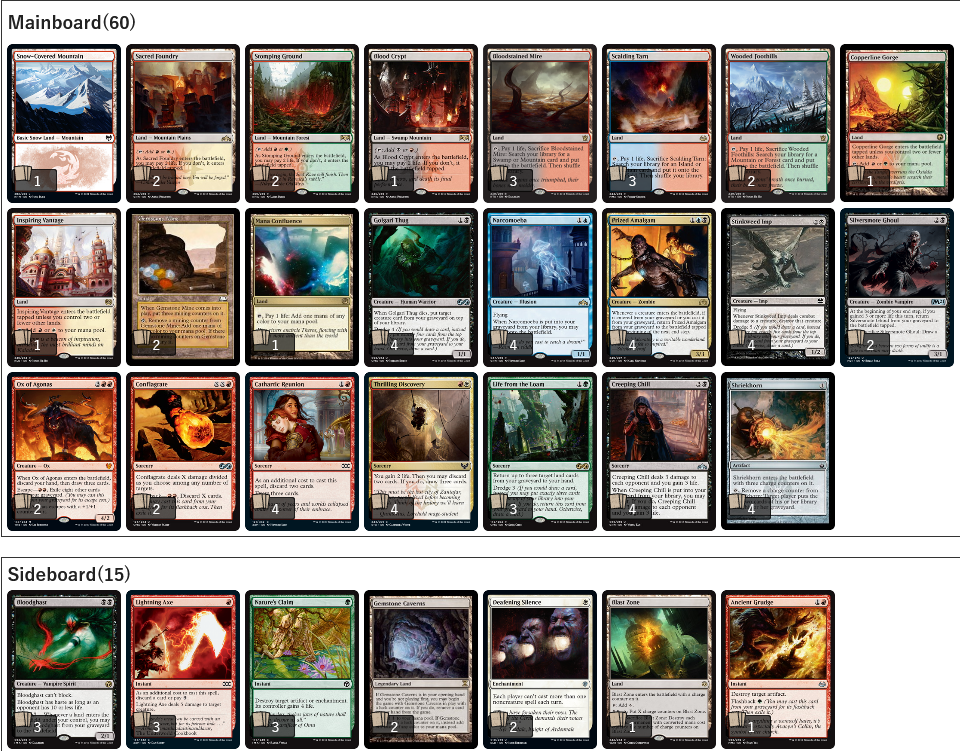 By replacing underpowered 《Merchant of the Vale》 with 《Thrilling Discovery》, it seems like Dredge can regain the consistency lost with the banning of 《Faithless Looting》.

Stretching the manabase to accommodate four colors, and having a low amount of one mana enablers is a little worrying, but being able to consistently mulligan to one of your 《Cathartic Reunion》 effects seems like a great boost, as they nearly guarantee that you’ll be able to mill over a dozen of cards or so. That should go a long way in ensuring you get to win game one, which is of paramount importance when playing Dredge. 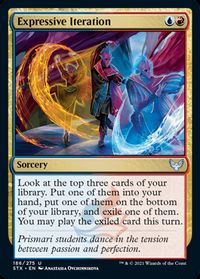 If you work a little bit, it seems very doable to make 《Expressive Iteration》 work as a two-mana draw-two. You don’t want to pair it with countermagic or other narrow interaction spells, but rather with proactive cards you can always play. 《Mishra’s Bauble》, Burn spells, cheap threats, discard spells, or just exiling a land to make your land drop all work.

While I’m not sure what’s a perfect home for this card, It seems absolutely worth trying alongside Prowess creatures, potentially replacing 《Light Up the Stage》 in the Izzet Prowess variant, or maybe in a Grixis Death’s Shadow-like shell.

The most promising batch of cards for Modern from the new set are the Magecraft ones. Given the wording of the ability, using a Storm card can yield you a barrage of triggers. There are two one-mana Storm spells available in Modern: 《Ground Rift》 and 《Flusterstorm》. 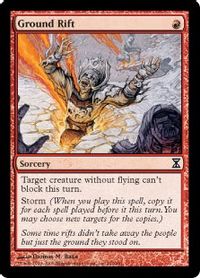 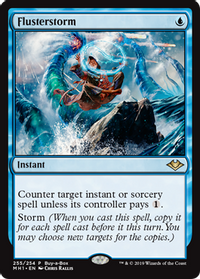 By using one of those, it shouldn’t be too hard to trigger Magecraft a bunch of times in a turn. For this reason, we are looking for the cheapest possible ones with effects that scale well. 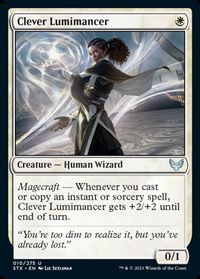 Being the one-mana option with the biggest amount, 《Clever Lumimancer》 is clearly the strongest option here. By growing two points of power with every spell, a turn two kill is not out of question. 《Lava Dart》, 《Manamorphose》, and Phyrexian mana spells are all ways to trigger 《Clever Lumimancer》 while fueling your Storm count. Another thing 《Clever Lumimancer》 does is, notably, serving as a redundant piece for 《Nivmagus Elemental》. 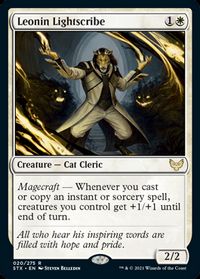 《Leonin Lightscribe》 is not a card that would be really exciting on its own, but it can serve as an alternative payoff for running Storm cards in your deck. 《Seeker of the Way》 used to occasionally be played in Modern Prowess decks, after all. Besides providing redundancy, the wide-pump aspect of 《Leonin Lightscribe》 unfortunately probably doesn’t matter much, although it could be useful with 《Monastery Swiftspear》‘s haste, effectively doubling your prowess output on such turns. 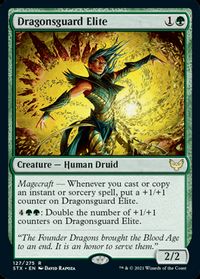 Lastly, 《Dragonsguard Elite》 is the most 《Tarmogoyf》-like option out of those three. Given that the best Magecraft enablers, and Prowess decks in general, are red-based, unless you’d like to splash two colors there is a low chance you’d want to include 《Dragonsguard Elite》 in your deck, although it’s still an option.

Here I have two sketches of decks built around Magecraft creatures: an all-in attempt trying to push it to the max, and a more tame, traditional prowess build: 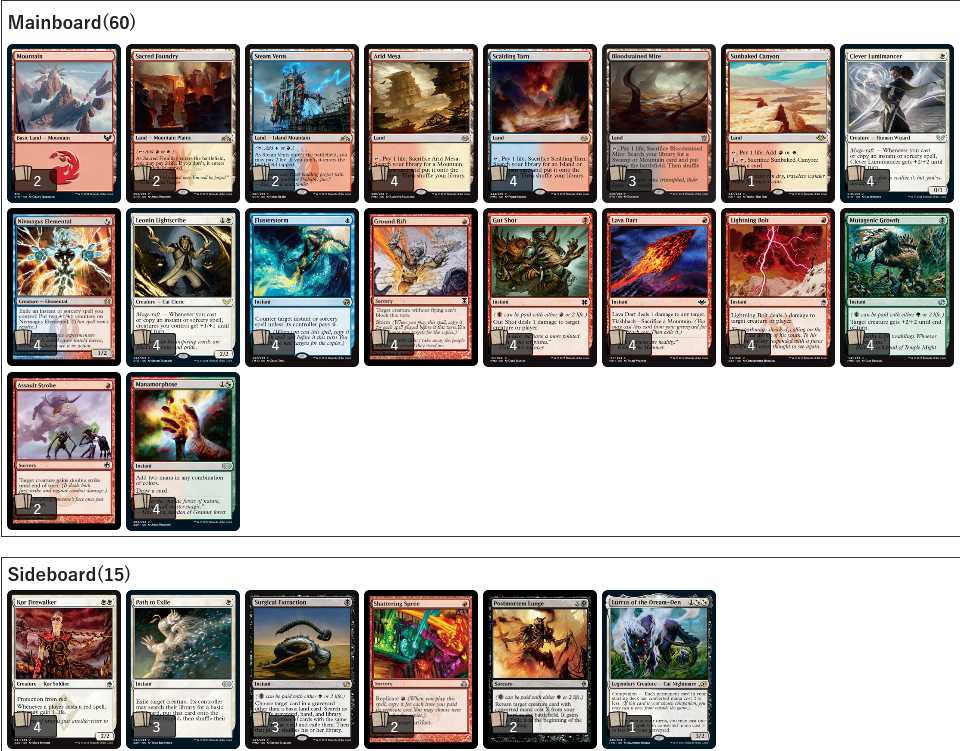 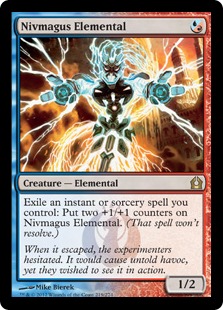 The 《Nivmagus Elemental》 build goes all out with 8 Storm and 8 Phyrexian spells, with twelve creatures trying to fully benefit from those. Nicely, both of the Storm cards actually have text in this deck. 《Flusterstorm》 works as some protection against removal, while 《Ground Rift》 can help you push through blockers. Builds like this typically don’t stand the test of time, but we potentially have a very explosive deck here.

The second approach is trying to be more consistent, while still retaining some of that cheese factor with 《Ground Rift》: 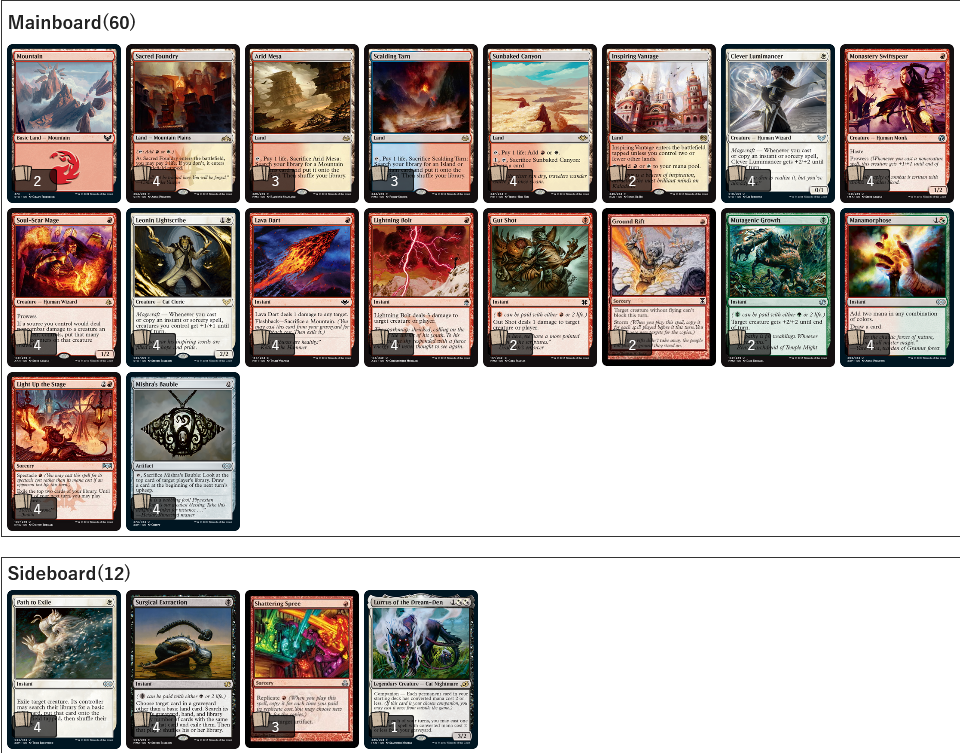 Out of all cards in Strixhaven, I’m expecting 《Clever Lumimancer》 to be the most impactful in Modern. 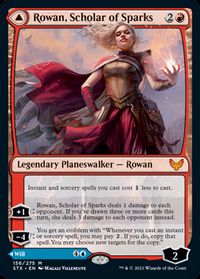 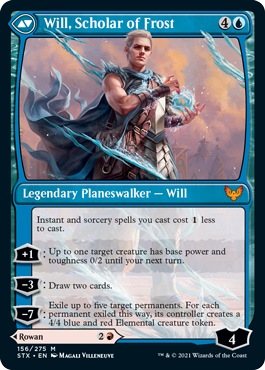 While both of those planeswalkers’loyalty abilities are fairly unexciting, their static ability is one we can recognize from 《Baral, Chief of Compliance》 and 《Goblin Electromancer》. Traditionally the cost reduction effect was restricted to easily killed creatures, so being able to supply it on a three-mana planeswalker is not necessarily the worst proposition ever.

Unfortunately, 《Rowan》‘s loyalty is low enough to still die to a simple 《Lightning Bolt》 or really any creature attacking; her plus is extremely lackluster, and her emblem ability will only come up against creatureless control.

《Will》 for the most part is too expensive to be really relevant, although it’s alo plausible to cast and draw some cards against the slowest of control decks. I don’t have high hopes for the card, but I could see a few copies sneaking into Izzet Storm’s sideboard, even if it’s also a very low-tier deck in today’s Modern. 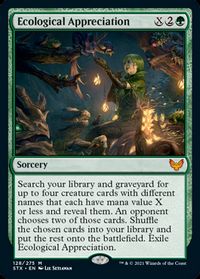 《Ecological Appreciation》 is a creature variation of 《Gifts Ungiven》, and it’s a card I got asked about relatively often during the spoiler season. At first glance, it might look like a very useful tool when it comes to assembling creature-based combos.

Unfortunately, when you try to conjure real piles you would actually search for, it all starts falling apart. It’s true that 《Heliod, Sun-Crowned》 and 《Spike Feeder》 both cost three mana, but your opponent will always make sure not to give you the combo, so you’ll end up paying six mana for two three-drops.

The safety valves of 《Ecological Appreciation》 exiling itself and shuffling the remaining chosen cards back into your deck make sure that it’s not possible to put your opponent in an unescapable bind with cards like 《Eternal Witness》. This one I think will be an absolute bust.

Those were the main potential additions to the Modern format I wanted to talk about! As I said in the opening paragraphs of the article, this expansion is probably going to be a bit lighter for Modern than usual, but nevertheless, there is plenty of new decks and sideboard tech to try out.

Thanks for reading and stay strong!