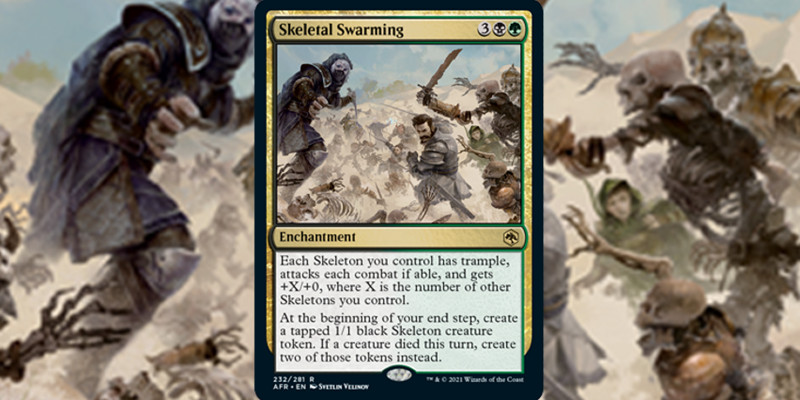 Hello everyone. This is the Hareruya Media Team.

This time, I’d like to share with you a card preview from the latest expansion, Adventures in the Forgotten Realms! The official announcement has already been made that several characters from the world of Dungeons & Dragons (D&D) will be made into cards. 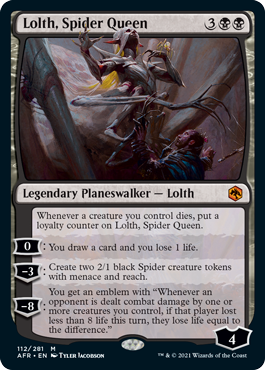 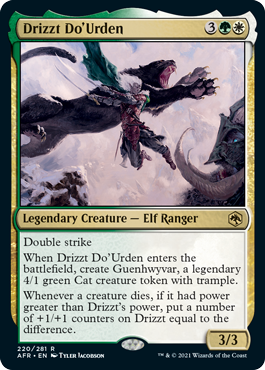 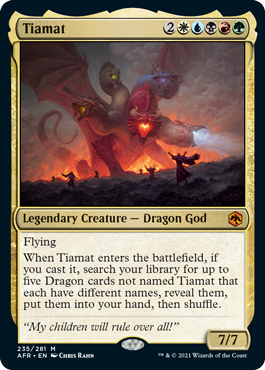 What kind of expansion is Adventures in the Forgotten Realms, the first D&D-themed set in Magic history? Instead of dice, pick up a card and head for the dungeon!

D&D is the world’s first and most widely played role-playing game. It is a fantasy tabletop RPG in which multiple players act based on dice decisions and use their imagination to create a single story. For more information, please visit Wizards of the Coast‘s “What is D&D?.

An essential element of the D&D experience is the various characters such as dragons, some of which are familiar to magic players such as skeletons. 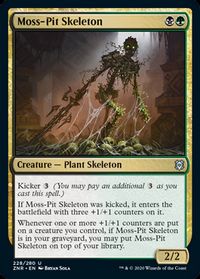 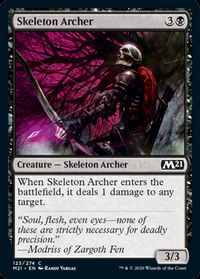 Skeletons are described in D&D as follows.

Created by dark magic, it is a creature whose entire body is made of bone. It has no emotions, no soul, only obedience to its creator’s will. Often, skeletons are placed as guardians in dungeons and tombs. In undead legions, skeletons are the basis of walking soldiers.

So skeletons are creatures that have no emotions, missing their souls, and are only subject to the commands of their creators. Which leads to the next phrase that makes me wonder about one word. Skeletons are often placed as guardians in dungeons and tombs.

I’ve never heard the word “dungeon” used in Magic universe before. In fact, “Adventures of the Forgotten Realms” brings in the dungeon in D&D as a new mechanism. 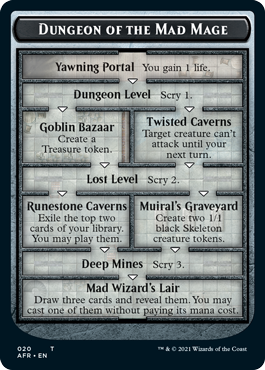 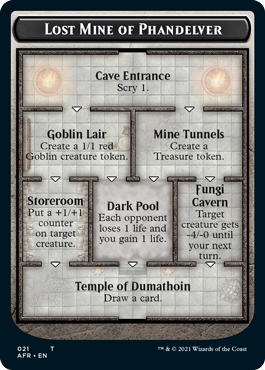 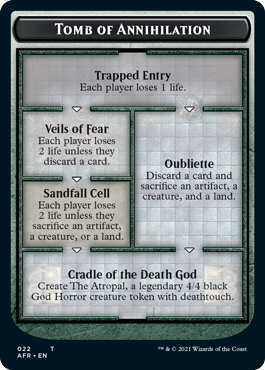 The new Dungeons mechanism is outside the game at the start of the game, and is placed in the command zone when used. During the game, when you perform the new keyword process “venture into the dungeon” by an activated ability, triggered ability, or card effect, you can choose the “dungeon” of your choice to face. 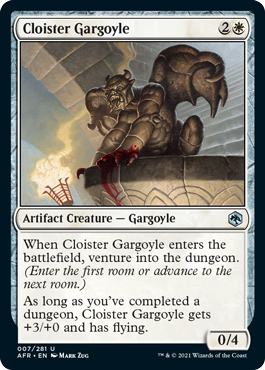 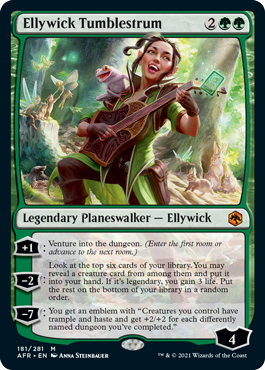 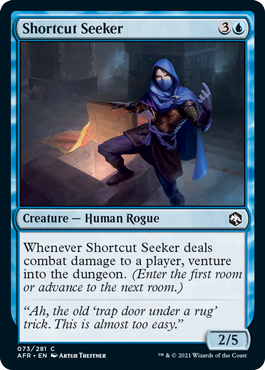 The smallest, the 《Tomb of Annihilation》, has only three levels, while 《Dungeon of the Mad Mage》 has more than double that, with seven levels. There’s a reason why it’s so long, so that you can get a more powerful bonus effect when you complete it. In addition to drawing 3 cards, “《Dungeon of the Mad Mage》” gives you an unbelievable effect where you can cast one of them for free.

However, what I’m wondering is whether you can last your life that long. With a small amount of life recovery and scry, you’ll be able to make it to the third and fifth levels, the third level blocking a creature from attacking and the fifth level creating two skeleton tokens. This is a great way to protect yourself from your opponent’s attacks, so when you get to《Dungeon of the Mad Mage》, aim for it as quickly as possible.

It seems that skeletons appear frequently in Adventures in the Forgotten Realms. So let’s move on to the preview! 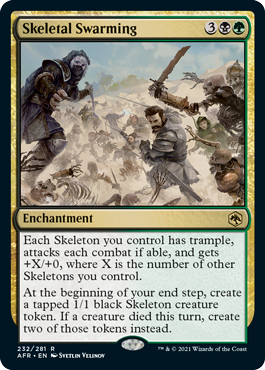 Each Skeleton you control has trample, attacks each combat if able, and gets +X/+0 where X is the number of other Skeletons you control.

At the beginning of your end step, create a tapped 1/1 black Skeleton creature token. If a creature died this turn, create two of those tokens instead.

《Skeletal Swarming》 is based on the Dungeons & Dragons monster “Skeletal Swarm”. The skeleton is a must-attack, but if it goes on the attack, its power is increased for each other skeleton. No emotions, no soul, just following the orders of its creator… this is a card that is very much like a skeleton.

However, since the attack is forced, it can sometimes be dealt with one-sidedly. This is where the second ability comes into play. 《Skeletal Swarming》 automatically creates a skeleton token at the end of your turn. And if a creature died during this turn, that number goes up to two! So from your opponent’s point of view, even if they want to block to protect your life, they are forced to make a tough choice that will give you extra strength for the next turn.

If you attack and get dealt with one sidedly, you want to use it well. Black is a color that specializes in sacrificing aggressively. If you look at the sacrifice outlets (cards with sacrifice effects) in the Standard pool, you’ll see… 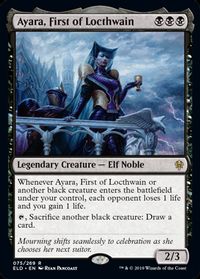 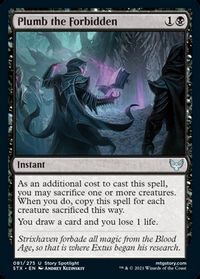 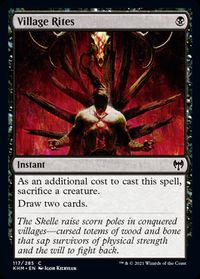 I found a number of creatures and spells. Among them, 《Ayara, First of Locthwain》 is a good matchup card that drains life and converts it to draw when a skeleton token enters the battlefield. 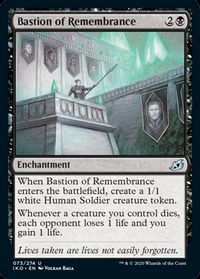 It’s also a good idea to combine cards that trigger when they fall into the graveyard. 《Bastion of Remembrance》 gives you a drain effect on all skeleton tokens. This way, even if you don’t have a sacrifice outlet to attack with, it won’t go to waste.

There is also an extended art version of the 《Skeletal Swarming》, which is only available in collector boosters. If you want to enjoy the world of Adventures in the Forgotten Realms, be sure to check this out as well. 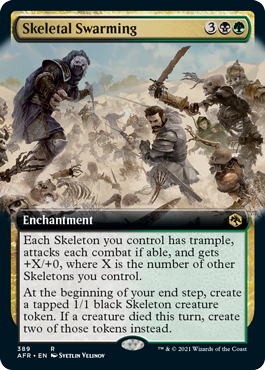 This time, I brought you a new card from “Adventures in the Forgotten Realms”, 《Skeletal Swarming》. As the name suggests, these automatically generated skeletons that attack you in packs are nothing but a threat. If you have the sacrifice outlet and sacrifice rewarding cards, you can make a Sacrifice deck for Golgari or Jund.

If there are other skeletons in the game, it might be interesting to build a deck that focuses on increasing power when attacking. This is a card that has more synergy with the deck as a whole than it does on its own, so it’s exciting to build.

Last but not least, tremendous thanks to Wizard of the Coast, we were able to share with you a preview card from the “Adventures in the Forgotten Realms” which will be released near your local game store on July 23rd, 2021!