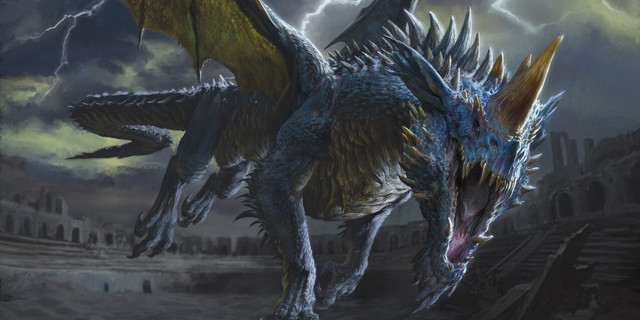 These days current Standard seems to be getting a bit stale. It’s been the same few decks that haven’t changed much for some time. Unfortunately, Adventures in the Forgotten Realms doesn’t really seem to have enough heavy hitters to really shake things up. But luckily in a few short months many of the most powerful cards in Standard will rotate out of the format. 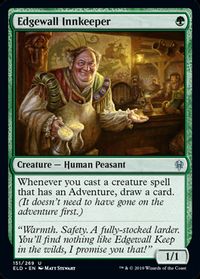 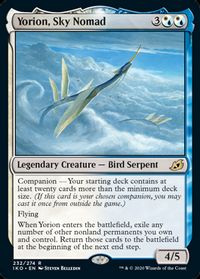 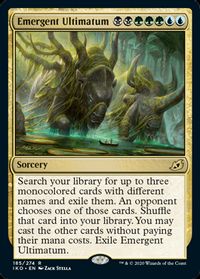 So long to Adventures, Companions, Ultimatums and many more. I’m sure this will open up space for some cool new decks, but I’m really only excited about one thing and that’s some new control decks. 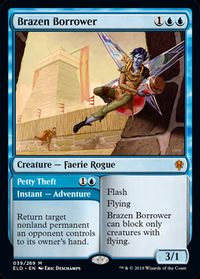 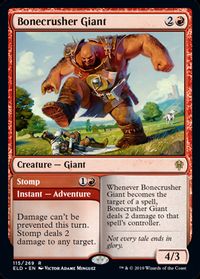 Basically just 《Brazen Borrower》 and 《Bonecrusher Giant》. Which were an important piece because they were both extra threats and extra answers. Unfortunately there isn’t really any card that will play double duty like that so you will have to choose. 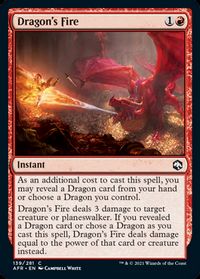 《Dragon’s Fire》 seems like a decent new removal spell to me. It seems generally a bit worse than 《Frost Bite》 since it costs more, but it could end up being better if lots of people are playing this dragon deck because it can actually kill an opposing dragon sometimes. It is obviously a poor replacement for 《Bonecrusher Giant》 but it’s still a decent removal spell. 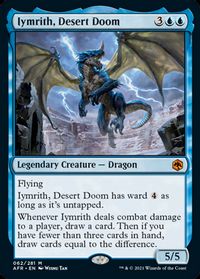 This seems like one of the nicest cards from Adventures in the Forgotten Realms. It reminds me a lot of 《Dragonlord Ojutai》. Ward 4 will make it difficult to kill on the turn that you cast it. And when you only have to bring the shields down when you have the potential to respond.

Unlike 《Dragonlord Ojutai》 it’s only mono blue so it can slot into different color combinations more easily. Unfortunately in this particular deck it also competes directly with 《Goldspan Dragon》 which is probably a bit better. 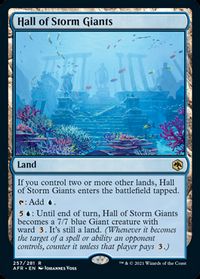 This land packs quite the punch. The cost to put these new man lands into your deck isn’t super high since they come into play untapped some of the time. So if it’s in your opening hand it is basically just going to be better than a basic land. 《Hall of Storm Giants》 seems particularly nice in a control deck since it seems like a fairly effective extra win condition. 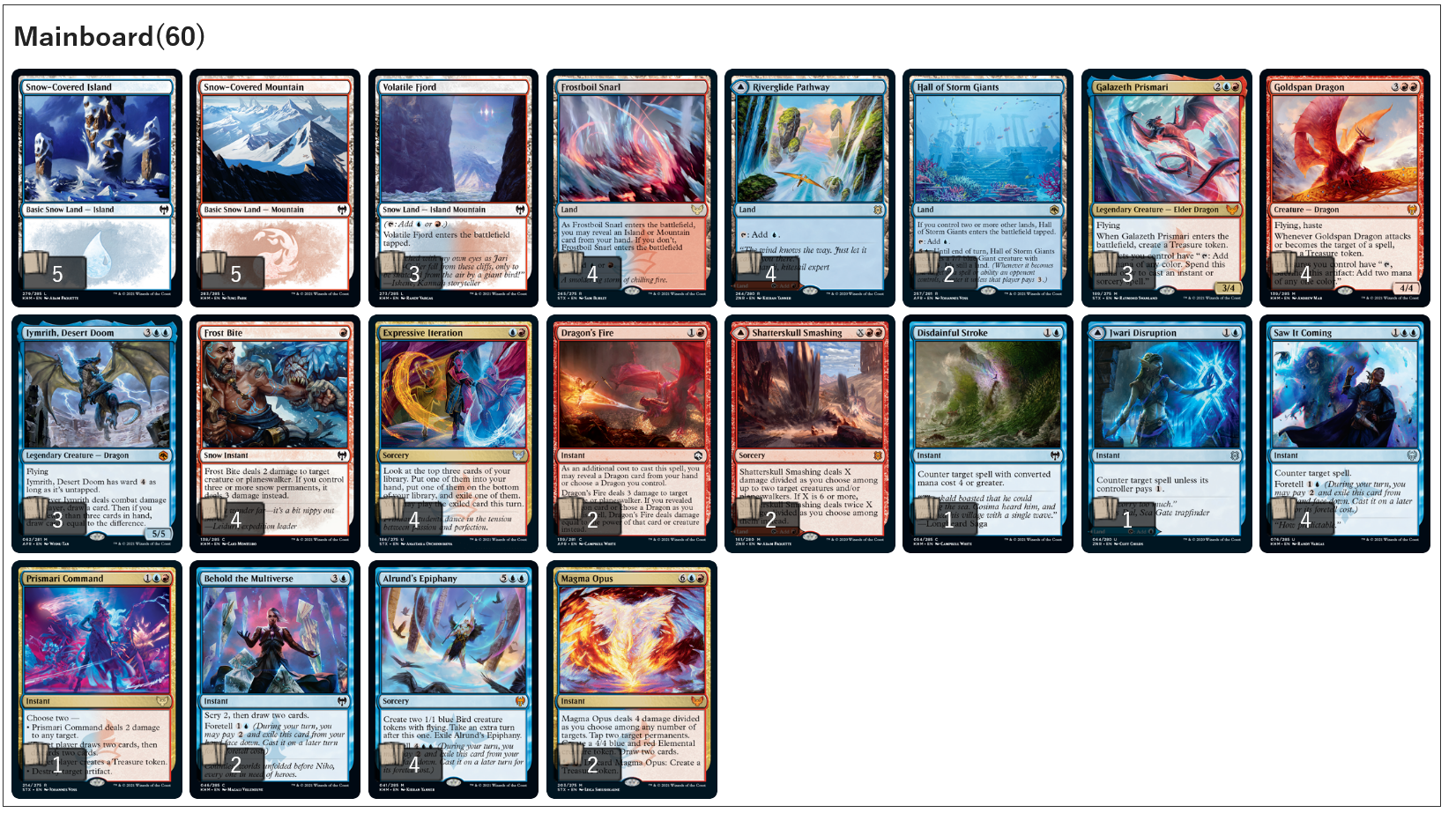 This deck seems like a good place to start for 2022 Standard. It doesn’t really need anything from Innistrad Midnight Hunt. So I would be pretty surprised if people didn’t play some version of the deck in the future. But this deck is not new or exciting and it barely qualifies as a control deck.

What about something a little more slow, reactive, and speculative? A deck that, you might say, has some room to grow. Whenever Standard is fresh everyone has to ask themselves how is Azorius Control? Well let’s take a look. 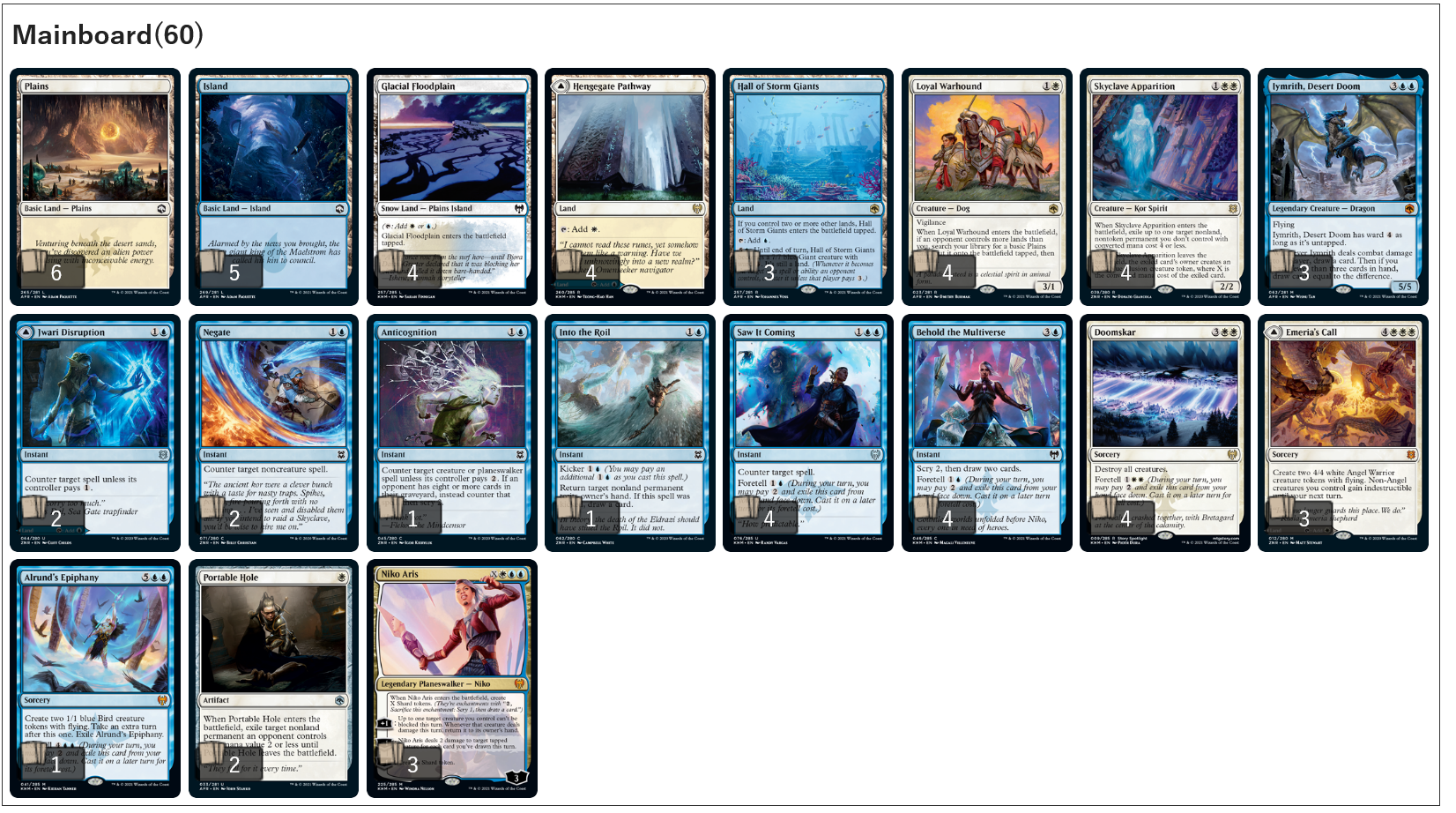 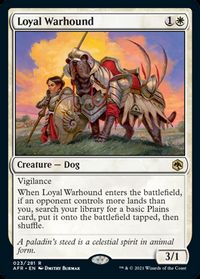 It’s been a while since 《Knight of the White Orchid》 was Standard legal. That was a pretty reasonable card and this variant isn’t too different. It’s nice that it helps to catch you up when you are on the draw doubling as a 《Rampant Growth》 and a creature. 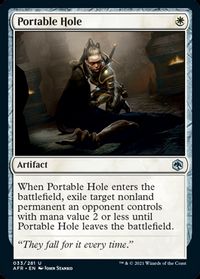 It’s probably a passable removal spell depending on how much stuff there actually is that’s small enough to fall into this particular hole. At the very least it will be a promising sideboard card against aggressive decks. 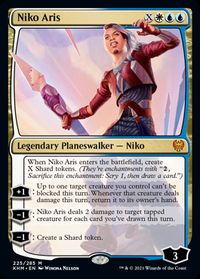 I still think that 《Niko Aris》 is a somewhat promising card. If the power level of Standard drops enough and there is a deck UW deck that can effectively utilize the abilities. Bouncing 《Loyal Warhound》 seems kind of reasonable. 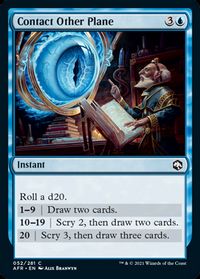 Honestly, I think compared to the Izzet Dragon deck the Azorius control deck could use some help. It could probably use another decent counterspell. Maybe an 《Essence Scatter》 that’s better than 《Anticognition》. That might help against aggro decks and Dragon decks. Also some sort of catch all removal spell would be nice as well. 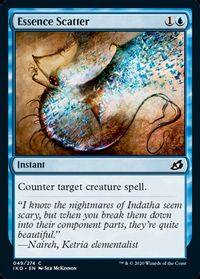 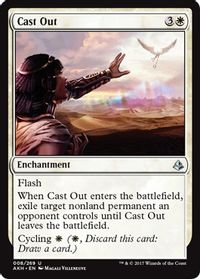 Certain permanents are going to be a bit hard to answer once they are on the battlefield. It would be nice to have something like 《Cast Out》 or 《Elspeth Conquers Death》 that could remove more expensive permanents. I’m particularly worried about man lands and things with haste since this deck currently has no instant speed removal spells. 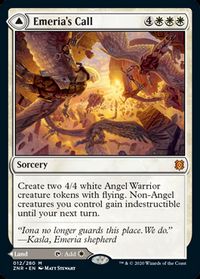 On the plus side 《Iymrith, Desert Doom》 seems like a pretty neat win condition. In combination with some 《Emeria’s Call》 and 《Hall of Storm Giants》 this deck probably wouldn’t have too much trouble actually finishing a game at some point. 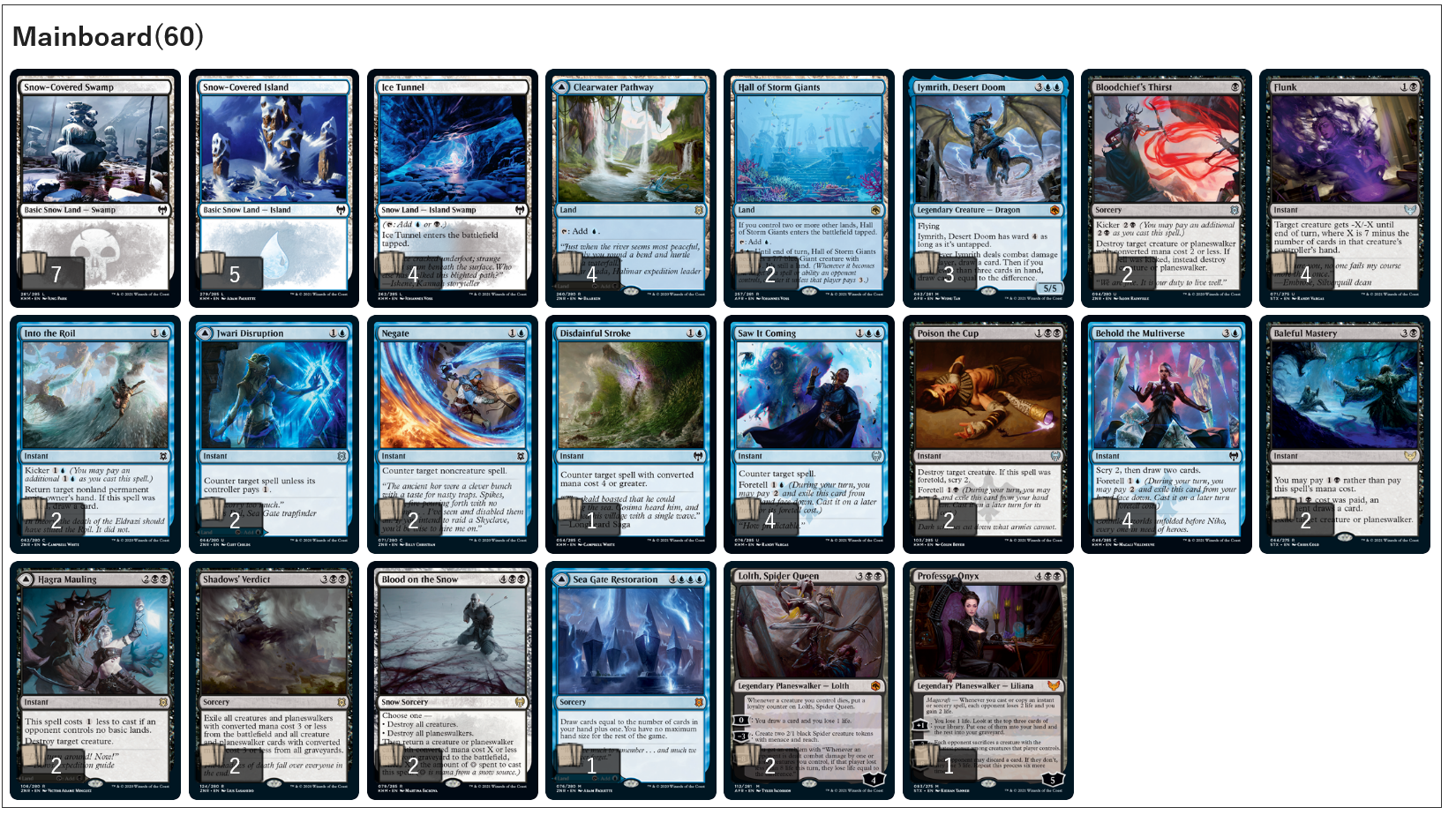 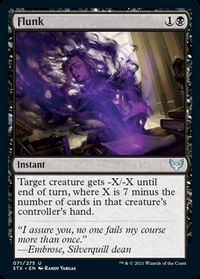 This seems like a decent removal spell to fill the void that 《Heartless Act》 and 《Eliminate》 will leave behind. Usually your opponents won’t have too many cards in hand so this will hopefully get the job done often enough. 《Power Word Kill》 is another decent option but I’m concerned that it can never kill any Dragons. But there will probably be another 《Doom Blade》 adjacent card in the next set so we can evaluate at that point. 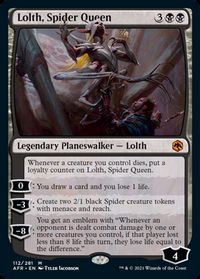 This seems like a decent Planeswalker to me. It does a pretty decent job of protecting itself when it comes into play with the 2 reach spiders. And if you untap with it you can start drawing extra cards every turn.

Unfortunately it’s not very good at winning the game and the ultimate is a going to be pretty difficult to reach for a deck like this, but Planeswalkers aren’t usually judged on the power of their ultimate. 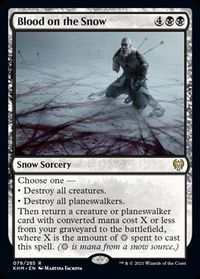 This deck might have some trouble actually winning the game. The ideal win condition is generally something that isn’t only good once you already have the game well in hand. This card does double duty as an unconditional 《Wrath of God》 and it’s also a way to get back one of your dragons or Planeswalkers. The problem is that 6 mana is a lot so you need to get a lot from cards that are so expensive. 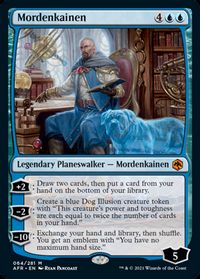 This Planeswalker seems a bit worse than 《Professor Onyx》. It’s abilities are somewhat similar but it doesn’t have the extra passive ability that is a pretty big deal breaker. In an effort to not play more 6 drops than necessary I probably would not want to play both of these.

This deck is close to being a real Standard contender. It could probably use another decent proactive threat or flexible win condition. 《Shark Typhoon》 had control players spoiled since it could be cycled in the early or mid game. But it could also win games easily once you had the upper hand.

Still I think Dimir is probably the most reasonable true control deck for Standard 2022. It seems kind of nice currently and could easily be pushed over the edge when Innistrad Midnight Hunt comes out.

It is still early to call but I think it looks promising that there will be at least some good control deck in 2022 Standard.