Hello everyone! This is the Hareruya Media Team.

Wizards of the Coast has kindly given us the opportunity to introduce a card that will be included in the upcoming set “Dominaria United”.

Dominaria is a plane that has been at the center of Magic’s storyline and the stage for many cards sets. It has been the plane of many popular characters, including Urza and Mishra.

In Wizards official preview, we saw first the return of the “Kicker” mechanic.

We would like to introduce the preview card shortly, but we will first take a brief look back at the inseparable relationship between “Dominaria” and “Phyrexia”.

The invasion of Dominaria by Phyrexia began back from the set “Invasion”. Phyrexia is one of the planes, where everything is artificially created by darkness. The environment was vicious, where only biological weapons were allowed to survive, nothing like Dominaria, a plane of harmony. 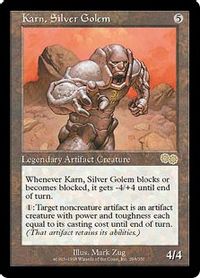 In the main story of this event, Karn once again foresaw the invasion of the Phyrexians. He tells the other planeswalkers of his increasing fears, but none of them take this seriously. 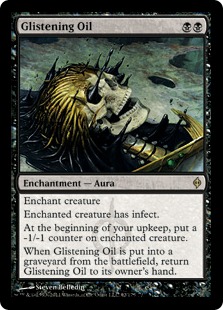 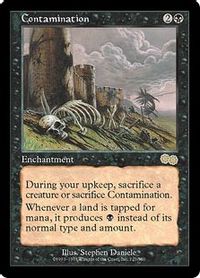 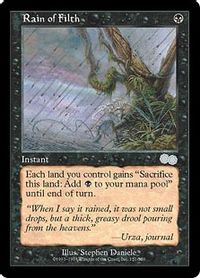 Searching for hard evidence Karn continues to delve alone. At last, finds the hard evidence of the Phyrexian invasion to Dominaria. Phyrexian oil, a fluid from the bodies of Phyrexians. This Phyrexian oil, which once spilled from his own body and contaminated the land of Mirrodin, has been discovered deep within the underground layers of the plane.

The evil oil transforms all who it touches into Phyrexians. The oil surrounds the land of Dominaria and then reaches out to their living. Even the Kavu, a race once created by the goddess Gaea. 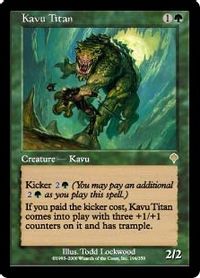 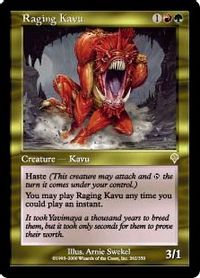 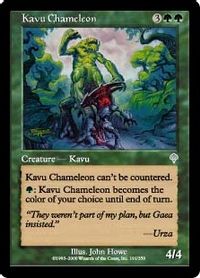 The Kavu were once a lizard-shaped fighting race created by the Dominarian goddess Gaea to counter the Phyrexian invasion. They were a reliable ally against the Phyrexians on their own, and fought with the elves of Llanowar. Even after the war with the Phyrexians ended, they survived and seem to have become an established race native to Dominaria. 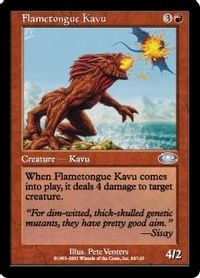 《Flametongue Kavu》, once a staple of Standard, is a well-known example of a Kavu. This creature, which deals 4 damage just by entering the battlefield, was a powerful creature against the Phyrexians. This card made us hesitate to play creatures with a toughness of 4 or less.

However, in “Dominaria United,” Kavu is now reborn by Phyrexian oil. The former guardian of Dominaria has become a pawn of Phyrexia.

Having said all, we introduce you the preview card. 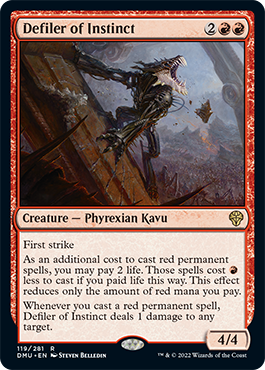 As an additional cost to cast red permanent spells, you may pay 2 life. Those spells cost 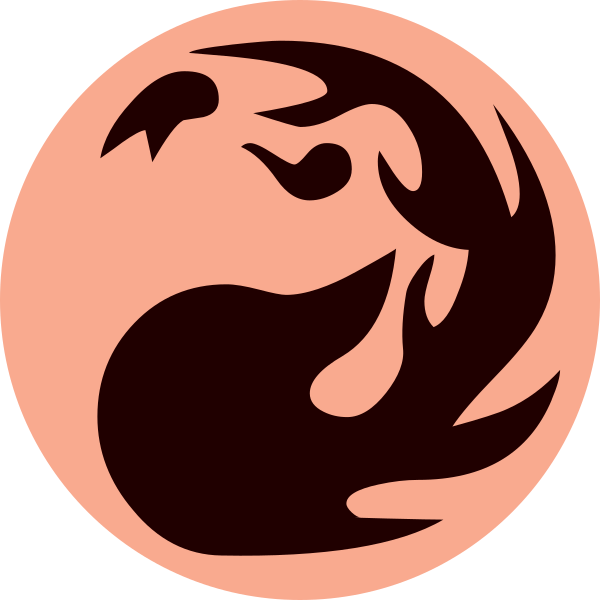 less to cast if you paid life this way. This effect reduces only the amount of red mana you pay.

Whenever you cast a red permanent spell, Deflier of Instinct deals 1 damage to any target.

《Defiler of Instinct》 is a Phyrexianized creature that exists in each color. In red, Kavu has been affected by the Phyrexian. A 4/4 body with first strike, an unquestionable design for a 4 mana. Once in combat, it will one-sidedly overtake your opponent. This design has the potential to be a finisher from an aggro to a midrange deck.

The explanation so far is only the Kavu part of this card. The creature that has been Phyrexianized has a unique ability. The ability to grant payment in your life to permanent spells of the same color. 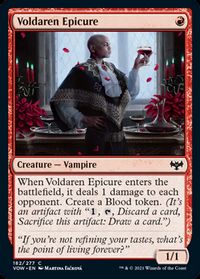 For example, let’s say you cast 《Voldaren Epicure》 with 《Defiler of Instinct》 in play. You can then choose to pay

to play it as usual, or use the ability of 《Defiler of Instinct》 to play it for 2 life. In other words, even if you don’t have the means to produce mana, you can play any permanent spell that costs one mana in exchange for life.

If you have life to spare, you can cast low-cost permanent spells using 《Defiler of Instinct》 all at once to regain control of the battlefield. This may add value to low-cost cards that have lost their role after the middle of the game.

In recent times, the role of the red cards has been to support the other colors. Although there are powerful creatures such as 《Goldspan Dragon》 and 《Thundering Raiju》, they are built with partners such as blue and white. I haven’t seen a mono red deck in a long time.

《Defiler of Instinct》 shows its true value the more red permanent spells are in the deck. It is likely to be played in decks that emphasize red permanents spells. 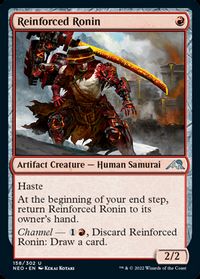 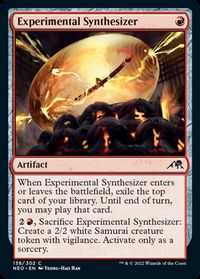 《Reinforced Ronin》 can be used as a damage source in the early game, and with 《Defiler of Instinct》, it can be used repeatedly from the midgame onwards. The ability to return to the hand, which was thought to be a downside, can be an advantage depending on how you play.

Also, this ability triggers permanents in general. 《Experimental Synthesizer》 is an excellent combination with 《Defiler of Instinct》, and just by playing it, you get 1 damage in and an extra card to play. If the exiled card is a permanent… this would be more than enough to seize control of the board. Red aggro with a cut-down mana curve and an emphasis on artifacts can be interesting. In addition to the cards mentioned above, there are good creatures such as 《Voldaren Epicure》 and 《Rabbit Battery》. What they all have in common is that they are low cost, creatures, and artifacts.

Looking at artifacts, we find a finisher card aggro decks must have. 《Dragonspark Reactor》 is an early playable damage source and accumulates damage every time you play 《Reinforced Ronin》 or 《Voldaren Epicure》. If there is a 《Defiler of Instinct》 next to it, the opponent’s life will be quickly reduced to lethal range. 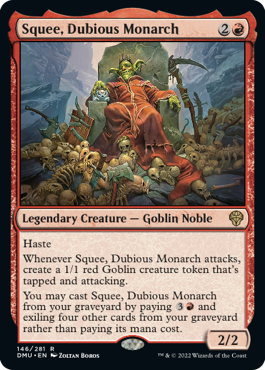 In this article, we brought you 《Defiler of Instinct》 from “Dominaria United”. Accelerating aggressive strategies, Kavu will be a great addition to Standard. It is likely to be played in aggressive decks in all formats, as long as the strategy lines up.

We thank Wizard of the Coast for letting us share a preview card from “Dominaria United” which will be released near your local game store on Friday, September 9th, 2022! Be sure to check it out!