What to play in Standard 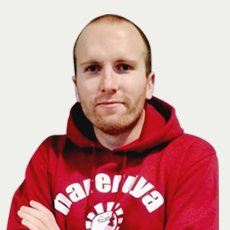 With upcoming Standard GPs, I would like to go through the best archetypes, compare their strengths and weaknesses and help you decide what to play at next GP, or at least better understand decks that your opponents will be playing. I am still undecided what I want to play, so if you are in the same spot, this article might help.

After dominant performance of my Genesis teammates at GP Denver, Temur Energy has huge mark on its head and for good reason. It plays very powerful cards with some removal spell and acceleration, which is a good recipe for success. There is also no single card that beats it, so it is not easy to hate this deck out. And if people start playing some decks that are good against it, this deck is pretty customizable so it’s not hard to beat anything, but pretty much impossible to beat everything.

– Doesn’t fold to a single card

– Everyone knows this deck and is somehow prepared against it

For the next GP I do not think Temur Energy is the best choice, mainly because of like I said, everyone is gunning for it and people will go a long way when trying to beat this one.

I believe that Standard is at very good place right now, with multiple great decks with similar power level. Because of that, I think it is important to metagame properly and innovate every week and not just try to play what was good 14 days ago.

With that said, I think it is better to play something that has at least decent matchup against Temur Energy, because people will play it and it will be everywhere. If you do choose to play it, I recommend doing at least some adjustments, preparing mostly for the mirror. I found out that one of the best cards in mirror is 《Rhonas the Indomitable》, so you can try to play multiple of those to get some edge. Another thing that I liked was 《The Scarab God》 that Michael Jacob played in his Temur Energy, narrowly missing top 8 of GP Denver. I am not sure how good it is in the mirror, because some of the games are very fast and you don’t have a time for it, but once you stabilize the board, 《the God》 takes over very fast and is unbeatable. 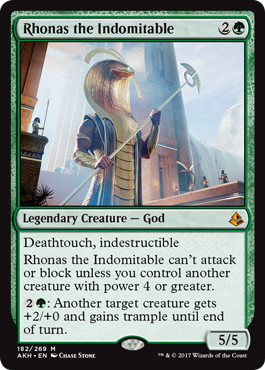 Breakout deck of GP Denver that many of pros played and although it didn’t win, it put a lot of people on top of standings after round 15. It is a consistent combo deck with a lot of card selections, powerful nut draw and a lot of interactions. Unfortunately, it is really hard to play properly, because there are so many little things that you have to sequence correctly.

Right now most common interaction people have with you in maindeck is 《Abrade》, which is annoying but very beatable, because you have a lot of ways to find your 《Gift》, with plenty of card draw. What could be problematic is if people take this deck seriously and start playing more hate cards, mainly graveyard hate like 《Scavenger Grounds》 or 《Crook of Condemnation》. 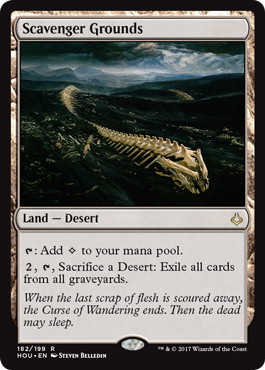 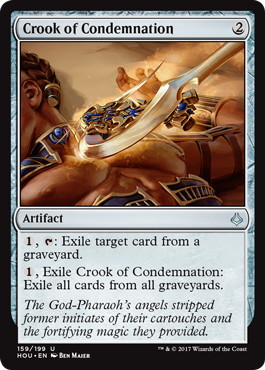 Very important part of this deck is to have good sideboard plan when your opponent has a lot of interactions with 《Gift》, so you can transform your deck into midrange deck that is not reliant on graveyard. I think that is very important thing with the deck, so if you want to do well you need to master that part.

I am not sure if we can do better, it is definitely hard to do better than 《Glorybringer》 because it is the perfect threat to avoid 《Negate》, which is a card that will be the most common sideboard card against you from blue decks. 《Chandra》 is fine, but I think it is possible that there is something better. Problem with 《Chandra》 is that she is caught right into 《Negate》 and is not that impressive against lot of cards, especially haste creatures. All in all I think this deck is a good choice, but demands a lot of preparation and gets weaker because people now know it is a real deck and might prepare for it.

– Powerful combo that ignores most of things your opponent is doing

– Very consistent with all the card draw you have

Zombies is good linear aggro deck with fast clock and some resiliency. But there are two problems with the deck. 《Skysovereign, Consul Flagship》 and sweepers. Both are hard to beat if your opponent has some reasonable cards to go with them. 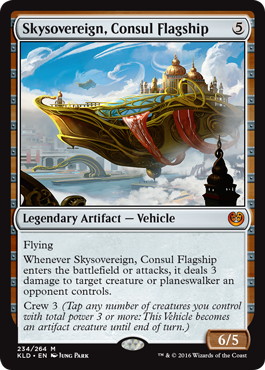 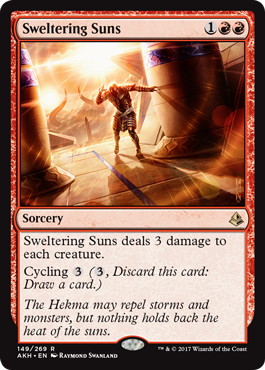 The good thing is that if people see Temur Energy and Jeskai 《GPG》 as decks to beat, they might start cutting those cards from their decks, which would be the perfect place for Zombies to be in. Because if you are not prepared for Zombies, you will lose to them.

I like maindeck 《Kalitas》, because most of the decks now are creature based and it is such a powerful card that wins matches on its own. In sideboard I would play multiple 《Dispossess》 to combat 《GPG》, but other than that, I think this is a common list and you don’t need that many changes to have a good list. 《Ob Nixilis Reignited》 is a card I like in Zombies. It is great against sweepers and if people have small removals against you, so I can see making a room for one in the sideboard. 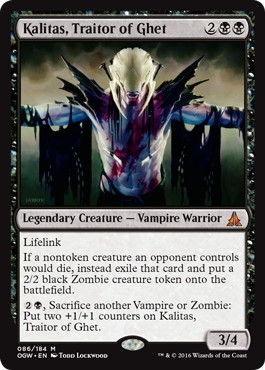 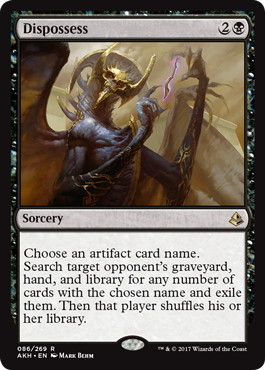 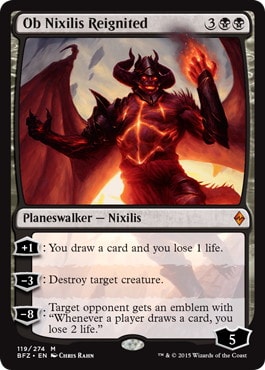 – Powerful nut draws that are hard to beat without sweeper

– Great choice if people are gunning for other decks

– Not powerful enough if people respect it

Didn’t expect this one, did you? So what changed, why should this deck be good now? I am not sure, but I have been winning with this deck quite a bit in past few days. I think one of the reasons why this could be good is because there are not that many people playing Ramunap Red now and not enough people play 4 《Abrade》 in their maindeck now. Unfortunate part is that if people are preparing for 《GPG》 by playing more 《Abrade》/ Artifact removal, it hurts this deck a lot too. 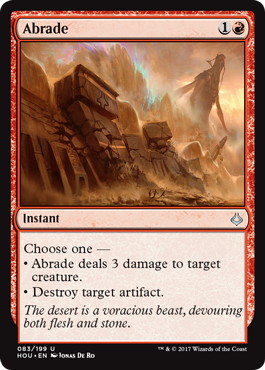 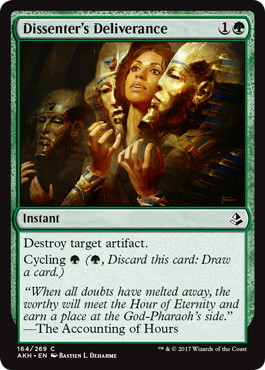 The difference of having and not having 《Oketra's Monument》 in this deck is quite, monumental. Most of your opponents having removal for your key card is definitely something that kept this deck in check. I believe that making this deck work without 《Monument》 is the way to go, but it might impossible and that is why no one is playing it 🙂 I will definitely try to do my best, but for now this is the list I was playing with. 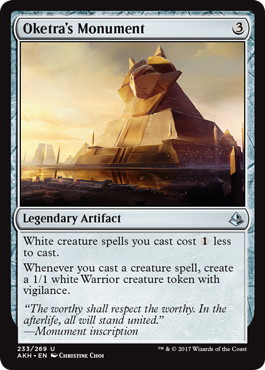 I was very happy with 《Cast Out》 as answer to all those problematic permanents that people are playing and generally as having more interaction. 《GPG》, 《Skysovereigns》, 《Chandras》, all those cards are problematic and 《Cast Out》 helps a lot. You don’t have that many cheap cards, so Cycling it in early turns is pretty free. 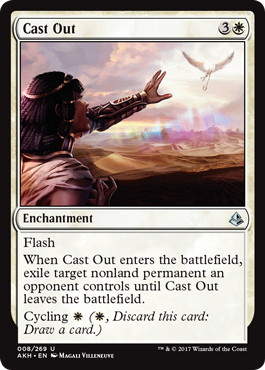 One card that I hate is 《Hanweir Militia Captain》. It is good with 《Monument》 but SO bad without it, it’s actually embarrassing to cast it. It is very hard to get to 4 creatures without 《Monument》, especially now when people play so much cheap spot removal. I would love to try something different instead of those, but so far I failed to find anything better. 《Walking Ballista》 and 《Glory-Bound Initiate》 are the best I found, but both have issues. 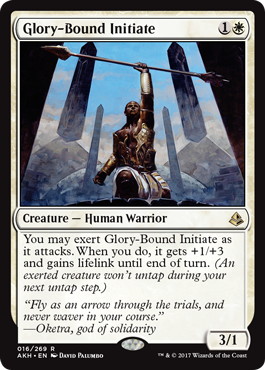 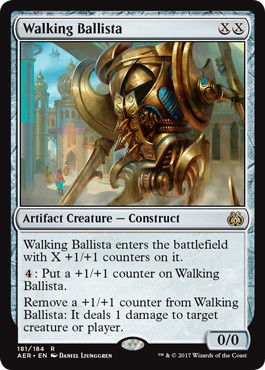 《Initiate》 is good because it is very good on turn 2 and costs 1 with 《Monument》, but having 3 power makes it awkward with 《Dusk // Dawn》 and I am not sure if you can run it because of it. 《Ballista》 is good lategame card and works with 《Dawn》, but doesn’t do much early turns where this deck needs help.

《Militia Captain》 also gets way worse after sideboard, because people have sweepers and more removals for 《Monument》, so it usually is just 2/2 for 1W. I would love to cut it, but I couldn’t find anything reasonable instead of it so far. 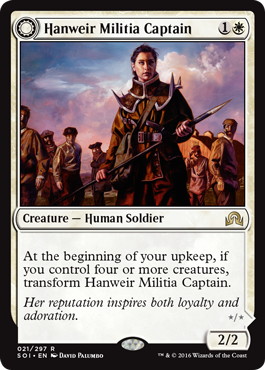 – People not prepared for it, especially with innovative version

One more deck that should be mentioned is Ramunap Red, because it is very powerful and you can hardly blame anyone for playing that one. 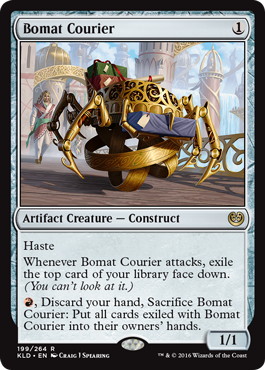 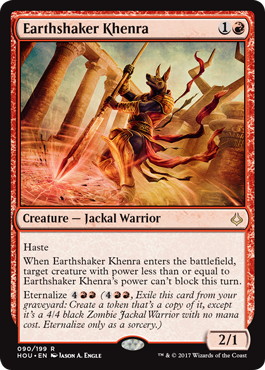 This is how I view standard right now and I think I will play one of those decks at GP Turin. I hope this article helped you to choose a deck for upcoming tournaments or at least showed you some strengths and weaknessess of those decks.