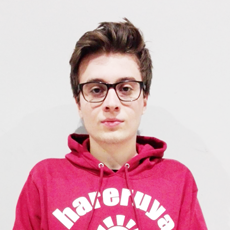 Hello everyone! It’s Petr again and today my article is going to be about what’s on everyone’s mind right now: Standard. Standard is in a very interesting place right now and many people are wondering, where it’s going to go.

Couple of months ago 【I wrote an article】, where I stated that UW control is not nearly as dominant as it might have seemed and that RG marvel and aggro with 4 《Unlicensed Disintegration》 will be good choices. I am really glad, that it turned out to be true, but on the other hand it wasn’t that hard to predict.

Now it’s a little harder, because the decks that are winning right now, are getting better, more tuned and overall more resilient, so it’s harder to find strategies, that are both good against the current tier 1 decks and are overall powerful enough to compete against a random field.

My take on it

Before I tell you what I think is going to happen during the upcoming weeks, I would like to say a couple of words regarding 【GP Madrid】: I played GB Delirium and I am really mad at myself for it. The reason I gave to myself, was that despite it not being greatly positioned in the metagame, it’s still a very powerful deck with a great plan and many people are still going to play decks, that it is good against and I played it a lot so I knew, that I am going to play it well and know, what to do in every matchup. Sounds reasonable right? Well not really, I am a professional player now and therefore I shouldn’t use these kind of excuces, just because I am not great with certain type of strategies or I didn’t play enough with a certain deck.

If you don’t give yourself the best chance to win in a certain tournament, then you just can’t complain if you do badly. And I did – granted the losses I got, were just because of me not having a good sideboard plan against aggro, because it was almost never played online and I didn’t play against it enough. I boarded out 《Vessel of Nascency》, because I assumed I just wouldn’t ever have time to spend 3 mana not impacting the board, but the truth was, that their deck was actually much slower post board with planeswalkers and Ships and I lost with 2 《Traverse the Ulvenwald》 in my hand, when I couldn’t get delirium. It turns out, that even though a certain card get’s obviously worse in a matchup, it’s still just too important to your deck, that you just have to keep some copies in (even though you might want to cut 1-2). Yep, I messed up.

Anyway I think the best deck for the tournament was the 4c vehicle deck: it just has everything. You’re slightly unfavored against the BG decks, but you are crushing everything else. The deck is just great: 《Toolcraft Exemplar》, 《Smuggler's Copter》, 《Unlicensed Disintegration》, 《Gideon, Ally of Zendikar》, nut draws and great sideboard plans against everything. The deck looks something like this:

The Problems for control decks in Standard

What is going to happen now: I think that most people will try to play some kind of a control deck, to beat the 《Aetherworks Marvel》 deck and they might be relatively succesful, but they are just going to lose to the aggro decks: pretty badly actually.

The problem of control in standard right now is the following: Imagine that you play against aggro – yeah, you can get lucky and keep up in the early game with removal spells, but it doesn’t necessarily get you ahead – you just traded some cards and you can still easily die – it’s not like you have 《Sphinx's Revelation》 in your deck and you are just trying to survive. Your lategame is to get more gas with 《Glimmer of Genius》 and access to 《Torrential Gearhulk》 – problem is that you play more lands than the aggro decks, so the fact that you get to 2 for 1 doesn’t mean that you will end up with more gas.

It’s important to realize, that even though you have a pretty good chance to win, you will not always draw those removal spells, sometimes you will just have bunch of expensive cards in your hand. Other times you have those early answers, but you just loose to 《Gideon, Ally of Zendikar》. You can play more cards against aggro deck, but then you just lose to the slower decks – in other words it’s very difficult and if your name isn’t Shota Yasooka I would advise you to go down the beatdown path.

Let’s talk about the Marvels

The 《Aetherworks Marvel》 decks, can’t really improve their control matchup game 1, because they would just get crushed by the aggro decks, so they have to evolve somehow. I’m not sure how it’s going to look. They might start to play the 《Whirler Virtuoso》 like Steve Rubin did.

The 《Whirler Virtuoso》 is a fine play against most strategies and it overall works well with what the rest of your deck is doing, so it’s just a good card. I am just a bit worried, that the deck might not be good enough.

I saw a pretty good version of Temur Marvel playing 《Torrential Gearhulk》 that seemed promising. It played 《Glimmer of Genius》 and 《Galvanic Bombardment》 (you need something to get back the tempo lost) main deck instead of the 《Woodweaver's Puzzleknot》. 《Woodweaver's Puzzleknot》 is great with 《Aetherworks Marvel》, but it’s just not a great card without it. Not sure if it’s a better approach, but it let’s you play a 《Torrential Gearhulk》 (card is great). Problem of 《Torrential Gearhulk》 not being played is, that the control decks are just bad, compared to what everyone else is doing, but the card itself is very good I think.

I recently wrote on Twitter, that I broke standard and the deck I had in mind was Marvel with 《Nahiri, the Harbinger》 and a very similar version to what I had in mind won the 【Invitationals】:

I really liked the idea of 《Nahiri, the Harbinger》, because it’s great in the mirror and it fills the holes that the RG Marvel deck has – it let’s you loot away useless cards like 《Woodweaver's Puzzleknot》, exile 《Aetherworks Marvel》 and 《Emrakul, the Promised End》, while being a good proactive play that you can play as early as turn 3. You can also just ultimate it and get 《Emrakul, the Promised End》 with it. In the end, I tried it (my version obviously wasn’t tuned well enough yet) with mixed results and other people convinced me that it’s bad so I just abandoned it. Guess I should have given it one more shot.

People are not going to play Delirium now, because of the main consensus, that it just loses to Marvel. The matchup is obviously not great, but it’s certainly winnable. The main reason is, that most people presume, that they are huge underdogs and as a result, they take too agressive and risky lines and they lose because of it. The matter of fact is, that you’re trying to win the lategame, where you just win the 《Emrakul, the Promised End》 war with 《Liliana, the Last Hope》 and you should prepare as much as possible for that. Of course sometimes you just double 《Grim Flayer》 them, but it shouldn’t be your plan A.

That being said, people are starting to main deck 《Ulamog, the Ceaseless Hunger》 and at that point the matchup is indeed really bad. For that reason, people are going to abandon delirium for now and then it’s just going to disappear for couple of weeks, before the metagame settles down again. I think that Delirium would eventually get back, but the new set is going to get released before that, so it doesn’t really matter.

If you want success in the upcoming standard, play the broken aggro deck or try to find the best version of Marvel. GL!

If you want to ask me about something, I will be happy to provide you with an answer on facebook or twitter so don’t be afraid and just add me.

As always thanks for reading, Petr Sochurek. 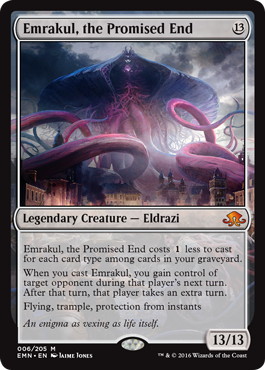 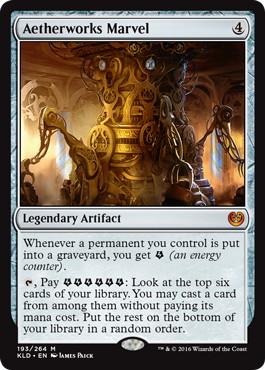 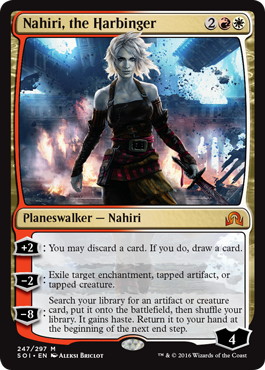