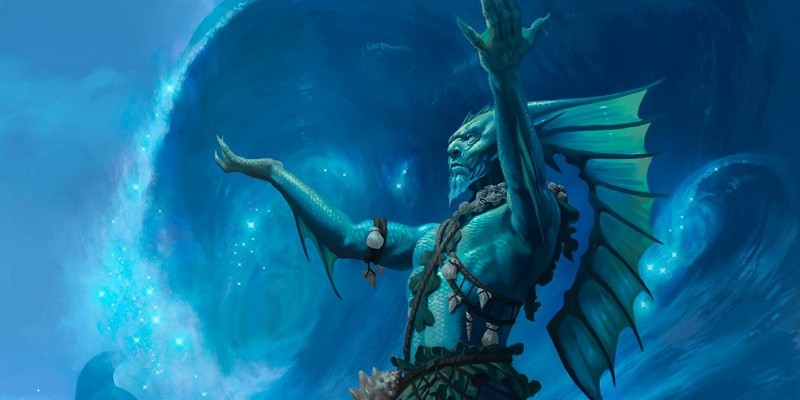 When a set first comes out, it is my favorite time to draft. This is because the strategies are not established people often make their picks based on individual power level. Limited to me isn’t just card evaluation, else bots would be able to draft the best decks it is about being knowledgeable about the different archetypes available, whether they are “tier 1” mainstream draft strategies or niche ones that happen 1 every 4 drafts, it’s important to be able to draft them when the time is right.

When a set first comes out, it often takes weeks before players realize what are the winning strategies. Now that we’ve gravitated towards MTG Arena, I’d say it takes even longer due to less human drafting. To me this is a bonus, it allows me to look at the set and figure out niche winning strategies that other people aren’t using. Not relying on bombs and using late picks or even 14th picks to win is my favorite thing about draft.

In this article I will go over my early thoughts on Theros Beyond Death Draft as well as key archetypes I’d like to draft and how I would prioritise cards. There are three main “synergies” that exist, “Graveyard Matters”, “Enchantment Matters” and “Targeting Matters” as well as an abundance of minor strategies that are supported throughout specific colors. I’m going to be going over my thoughts on each of these archetypes and the different ways I would approach building a deck in it.

At first glance, this is just a deck that plays a bunch of high impact Escape cards then fuels the graveyard using cards like 《Relentless Pursuit》, 《Funeral Rites》 or 《Towering-Wave Mystic》. The amount of support for fueling your graveyard is low and usually quite inefficient and most of the better Escape cards require at least three other cards in the graveyard other than itself.

This is actually the mechanic I am the most excited for. I would look to build “Graveyard Matters” in a more aggressive shell over one that tries to utilize cards that make zero board presence but fuel your graveyard. This is because if I take multiple turns off to fuel my graveyard, I run the risk of being out-tempoed by the more aggressive strategies that exist in Theros Beyond Death. Instead I will fuel my graveyard by attacking aggressively and use Escape as a way to still have game when I run out of cards in hand due to playing a bunch of cheap but small creatures.

I would look to be Blue as my main color. Blue has a few key common that I believe are going to be very late pick but ultimately be super important in an Escape-aggro deck.

《Towering-Wave Mystic》 is the best card for this deck and is likely a very underrated card. This card is what you want in a two-drop. It’s important to apply pressure while having ways to fuel your graveyard for Escape and this card really punishes players without an early play. Other Blue common cards I would look out for are 《Vexing Gull》 and 《Elite Instructor》. As you play a bunch of small but cheap creatures, I would look out for one copy of 《Bronze Sword》, it also synergizes nicely with your fliers and 《Towering-Wave Mystic》.

The best Escape pay-off card in this shell is 《Sleep of the Dead》. This card is likely a 10th-14th pick, but I would advocate towards having at least two copies in my deck. The effect looks minor, but the presence of having it available will quickly cause your opponent to start valuing their life total more highly and cause games to end with them having a bunch of expensive cards in both their hand and their graveyard, it’s hard for them to only play or Escape a single creature when you have this card sitting in your graveyard with a board of random cheap creatures.

Since all these cards a very low pick, you want to spend the first few picks picking high quality removal and efficient creatures and rounding out the rest of your decks with these “unplayable” commons. The two colors I would look at pairing with Blue are Black or Red. From Black we have 《Mogis’s Favor》 which pairs insanely nicely with 《Towering-Wave Mystic》 against little creatures as well as multiple two-drop creatures you can fill your deck with. In Red, you get to pick up 《Underworld Rage-Hound》 in addition to picking up 《Mischievous Chimera》 on the virtue of being the only Blue-Red drafter and not actually casting any spells on your opponent’s turn.

Enchantments are of an abundance in this set but would also be likely overdrafted as a lot of the enchantments especially the Omen cycle, will be quite high pick on people’s list. My ideal enchantment deck will focused on a more aggressive shell pairing cheap Constellation creatures with enchant creature auras that are not sought after. It is important to not have a deck that relies on 23 first pick worthy cards as it’s just not realistic you can complete a deck that way. I would prioritise efficient Constellation creatures first and pick up any auras that fit in my deck in the later picks.

I would look for Green to be my main color. 《Setessan Skirmisher》 is my pick for the best common for this archetype and Green also contains cheap efficient enchantments like 《Setessan Training》 and 《Warbriar Blessing》. Creature Enchantments are also at a premium as you can keep your creature count normal while still having enough enchantments to activate your Constellations. I would ideally pair this with Blue or Black.

In Blue we have a premium uncommon in 《Eutropia the Twice-Favored》 as it does everything this deck wants. Additionally 《Triton Waverider》 is another form of recurring evasion that pairs nicely with Blue’s common aura, 《Ichthyomorphosis》. In Black we have 《Mogis’s Favor》 which is a recursive way to activate your Constellations as well as 《Hateful Eidolon》 which goes well with the amount of aura’s you are playing. Note this card works very nicely with enchantments that kill your opponent’s creatures!

Lastly we have “Target Matters” which is primarily a Red and White mechanic but I’d like to explore how this can go into different colors and the benefits it has. This pairs super nicely with decks that use auras that target your own creature as well we decks that go wide or make multiple creatures. At common we have 《Hero of the Games》 and 《Hero of the Pride》 that incentivises you to not only target them, but play a bunch of creatures to utilize their effect.

Ideally I’d like to remain Red and White and take every card that targets my creatures and all the payoffs including 《Hero of the Nyxborn》, but as you know with drafting, you can’t always force and what is there is another Red and White drafter at the table. I am very interested in pairing either of these colors with Black.

This may be an off choice at first, but the commons I’m most interested in Black is 《Mogis’s Favor》, 《Discordant Piper》 and 《Temple Thief》. 《Mogis’s Favor》 is a strong choice of Escape as it’s strong against one of your biggest weaknesses, a 2/1 on turn two. Additionally you can use it on your own creature to trigger your abilities. 《Discordant Piper》 is a solid two drop that leaves behind a body when it dies, which is great in a strategy that is trying to keep a board presence but the real gem in Black is 《Temple Thief》.

《Temple Thief》 at first glance is just a 2/2 for two with a small upside so you may be wondering why I value it so high. Not only are two drops very important at the start of any format, 《Temple Thief》 has an ability that makes blocking insanely hard. Your deck consists of a high amount of aura’s so not only do they benefit from making 《Temple Thief》 bigger, but you can also enchant their creatures to allow 《Temple Thief》 to get through. Remember this isn’t a high pick though and the biggest appeal to cards like this is it allows you to pick up important removal or aura’s early pick then complete your deck with two-drops that are at a premium in your deck but aren’t valued highly in others.

This is another deck that wants to be as low curve as possible to begin double spelling. It is possible to have a lower land count, but if we do, please try to have creatures different color to the instants that target, this would cause an easier manabased and not have awkward situations requiring multiple of the same source as early as turn three.

I’m very excited to start drafting Theros Beyond Death and capitalize on these two-drops that make their way around the table multiple times. To me drafting is about using your later picks in a way they win you the game and hopefully these initial thoughts can help you think of some archetypes you didn’t think could exist.

Jason Chung Jason Chung is a top player from New Zealand. He is known as the best New Zealander in the history because no one advanced to the Pro Tour Sunday other than him. He is skillful at playing combo decks so piloting UR Storm (Modern) or Rally the Ancestors (Old Standard) is quite easy for him. He also likes aggro decks like Burn (Modern), and kind of prison decks like Dragon Stompy (Legacy). Read more articles by Jason Chung

All Possibilities of Ravnica Allegiance Draft